Signs of the Times? 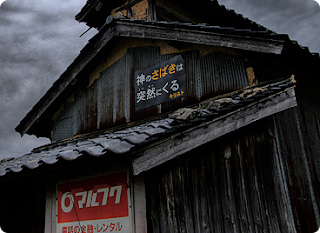 A drive through Japan's rural towns throughout the north might lead the casual observer to assume these places are staunchly Christian. Why else would signs everywhere proclaim such things as "The blood of Christ purifies sin," "God is watching your heart," and "The wages of sin is death"? But the truth is quite the opposite. In many of these rural areas one would be hard-pressed to find more than a solitary Christian, much less any church presence.

The signs are lettered in white and yellow calligraphy against a black background. Once they are up, they can remain for decades on end until the structure they are attached to literally begins to crumble. These signs, called "Kirisuto Kanban" (Christ signs), are the work of Christian group called the Bible Distribution Society, founded by a missionary in the 50's and now active only as a loose network of a few people. 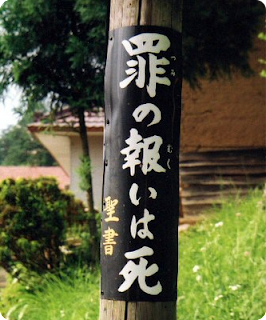 The group approaches a particular property owner for approval to post the sign. No money changes hands. In fact, the owner is unlikely to be a Christian. So why would these "unintended evangelists" agree to the cause at all? For some, the presence of the sign on their property functions as a helpful theft deterrent. Others feel they are raising the level of morality in their community. Superstitions abound in rural Japan and so still others may feel that to reject the sign would invite some form of divine retribution. These reasons, along with the group-oriented nature of Japanese in small towns, result in the small signs being posted heavily throughout northern Miyagi, Iwate and Akita prefectures.

If you want a healthy debate on evangelistic methodology, ask a Japanese Christian about the "Kirisuto Kanban." I'm not sure that one can say the signs are unhelpful to the cause of Christ. Certainly they move people to consider spiritual things. One might say, however, that the image these signs convey of Christianity to the average Japanese tends to be somewhat negative. Japanese pastors I've asked agree that the signs create an unhealthy fear and suspicion of the work of the local church. Particularly in the wake of 311, a balanced message is needed. The grieving Japanese needs a sign that reminds him that "Christ brings hope to life!" not simply that "After death comes judgement!" 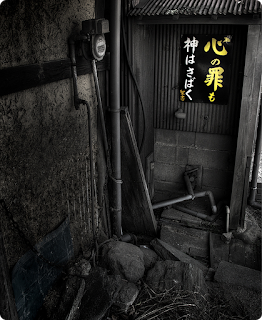 Regardless of one's opinion of the approach to evangelism, the placement of these signs on rusted out, cracked and dilapidated structures is, I think, unfortunate. It lends to the perception that the message of the signs is from a bygone era, and leaves one with a rather depressed feeling. It seems at times that the signs are almost protesting the somber conditions in which they find themselves displayed.We need to be humble in our convictions about through what means God works. God certainly honors the convictions and dedication of those with which we may differ. We also need to continually reflect on culture and Scripture and prayerfully consider what evangelistic means are most effective in reaching the heart of man. May God guide our hearts, heads, and hands!