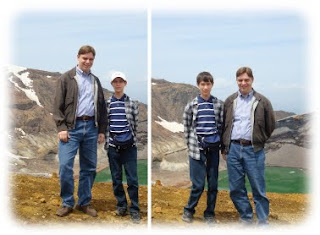 I finally figured it out today. I figured out why my son is growing taller so quickly. He might not be as tall as some 14-year-olds. But he's be going through shoes and pants sizes like there's no bottom to dad's wallet. See for yourself in the photo at left. Now I know why:

Today we stepped aboard the same Tokyo-bound commuter train. Justen was on his way to a few days of summer camp. I went along to help carry all his stuff (you'd think MK's would know how to pack lighter). This wasn't just ANY Tokyo commuter train. This was the Denentoshi line by our house, voted the most crowded of all. It's already outgrown the added capacity they spent 4 years building. And we were in the thick of rush hour, on a day many were returning to work from Obon vacation time. It was a banner day for crowded trains. I have NEVER been this tightly packed in on a train before. I thought I had seen the worst until today. WOW! Having a big suitcase with me only made matters worse. And it did little to engender Christian attitudes from those squeezed in nose to nose around me. 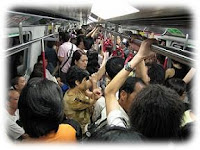 As the train lurched out of the station, I instinctively reached up to find something to hang onto. A hand reached PAST mine to the empty space on the metal rail over my head. It was Justen's hand. I was amazed. It was a day of record temperatures, and at least 98.6 in that train car with bodies crammed around us. I craned my head upward to catch even a bit of breeze coming from the ceiling air conditioning. A head craned PAST mine to do the same. It was Justen's head. I was doubly amazed.

Now I know why Justen's growing. Justen makes this commute every morning to school in Tokyo. His body seems to have adapted itself to this environment. It has to in order to survive this battle of the fittest on Tokyo trains. And all this time I thought it was all the white rice! Go figure.