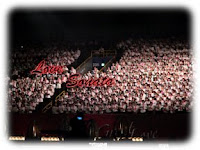 Quick! What do you get when you mix a sports arena, 20,000 Japanese and Koreans, gospel and cultural music, and God's good news? Asians reaching Japanese for Christ! That's a powerful key to this country's revival. Several Korean churches in cooperation with the Japanese church are working together to conduct major evangelistic crusades in 5 large cities in Japan called "Love Sonata 2007." Last week was the crusade in Tokyo. Altogether with friends, 19 people attended from our church including 7 unbelievers who heard a powerful Gospel message.

As I attended I realized I was witnessing the future of missions. The Western church and its missionaries, while still having a critical role here, are no longer the only players in the mission movement. Actually, long-term Western missionaries are in the decline in the East. The Asian church is beginning to mature and reach itself. There was no Billy Graham in this crusade. In fact, noticeably absent were any white faces on the center platform of the packed arena. Interpretation was done from Korean into Japanese!

I was both inspired and humbled, renewed and challenged in my own role as a messenger of the Gospel here in this country. It is great to see God at work in raising up new leaders in the mission movement.