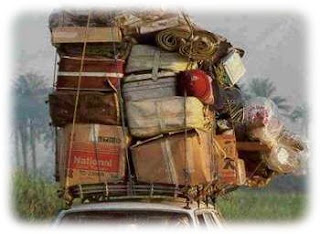 As the year draws to a close, Japanese people are preparing for the year’s most important holiday by cleaning their houses and decorating their front portals with pine and bamboo. On New Year’s eve, millions will prepare buckwheat noodles, signifying longevity and prosperity, and millions more will visit their local shrine or temple.

In another time-honored tradition, a minority will celebrate the year’s end in quite a different fashion; they will vanish into thin air. New Year’s eve, when people generally clear their debts, has become the most popular night for yonige, (the midnight flight). People who have fallen into debt, simply disappear in the night to start a fresh life in an anonymous city or country.

So common is the practice that it has spurned an industry of removal companies specializing in midnight dashes, even avoiding burly men with baseball bats, called variously benriyasan, (‘Mr. Convenient for Anything’) or yonigeya (‘Midnight Flight Shop’). These companies are good at disappearing acts. Once a family has dashed, the yonigeya will clear out the contents of the house in 15-30 minutes, storing them in a secret warehouse until they can be reunited with their fleeing clients. Full-service companies offer leased property and untraceable phone lines in a new city and can, for a hefty fee, provide a new identity, which is no mean feat in tightly documented Japan.

For believers we usually advise, not to flee but to face the music. Jesus says to us, "Come to Me, all you who labor and are heavy laden, and I will give you rest." (Matthew 11:28) Don't run away from Jesus, run to Him! He will shoulder your burdens and give you rest!