Can Japanese get their hope Bach?

Who would have thought Bach would be involved in 21st century mission work in Japan? I have frequently read with interest of the strong connection between classical music (particularly J.S. Bach) and Japanese interest in Christianity. Japanese have great respect for beauty and culture, so this is no surprise. It seems God uses a variety of unusual evangelists and music genre to guide Japanese to himself. Gospel music, of course, is another boom. Read the following excerpt of a longer article available here:

No other country in the developed world keeps as many palm readers busy. None produces as much pornography; nearly half the worlds smut is made in Japan—and openly consumed in trains and subways. Suicide rates have risen from 23,000 in 1996 to 25,000 in 1997 and 32,000 in 1998. In that year, seventy–four children killed themselves in Tokyo alone, twice as many as in 1997. According to opinion polls, 60 percent of the population admit to being afraid every day. Most fear bringing shame on their families, teachers, or superiors by failing at work or in school.

“What people need in this situation is hope in the Christian sense of the word, but hope is an alien idea here,” says the renowned organist Masaaki Suzuki, founder and conductor of the Bach Collegium Japan. He is the driving force behind the “Bach boom” sweeping Japan during its current period of spiritual impoverishment. “Our language does not even have an appropriate word for hope,” Suzuki says. “We either use ibo, meaning desire, or nozomi, which describes something unattainable.” After every one of the Bach Collegium’s performances Suzuki is crowded on the podium by non–Christian members of the audience who wish to talk to him about topics that are normally taboo in Japanese society—death, for example. “And then they inevitably ask me to explain to them what ‘hope’ means to Christians.”

Like Georg Christoph Biller, Leipzig’s current Thomaskantor and Bach’s sixteenth successor in that position, Suzuki sees himself as a missionary. “I am spreading Bach’s message, which is a biblical one,” he said, echoing the Swedish theologian and Lutheran archbishop Nathan Söderblom (1866–1931), who called Bach’s music “the fifth Gospel.” A member of the Reformed Church, Suzuki makes sure his musicians, mostly non–Christians, get that point. During rehearsals he teaches them Scripture. “It is impossible to say how many of my performers and listeners will ultimately become Christians, ” Suzuki said. He believes, however, that Bach has already converted tens of thousands of Japanese to the Christian faith. 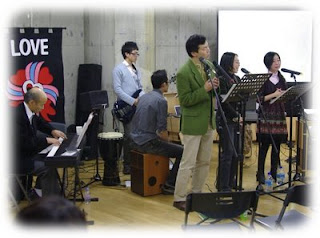 We had a great Sunday at Denen Grace. I get excited anytime I see Japanese people worshipping God. It's the purpose of missions! We want to transform Japanese into worshippers of God, not the idols in their hearts, homes, shrines and temples. A music group called "Living Waters" came in the afternoon and led us in a time of praise and worship.

Speaking of living water, it is interesting to note that the "bottled water" fad is no bigger than right here in Japan. More research has been done on drinking water in Japan than anywhere else. One company produces a bottled water called "Kangen." It's name means "return to the origin." The idea is that this water is a return to the origins of true water as found on the earth in nature before it was polluted by man. The claim is that it will also help your body to return to its original condition when you were young.

That's a pretty big claim. And I seriously doubt it is possible for it to live up to that. Good thing we've a source living water that works better. The supplier is none other than Christ himself who makes a really big claim as well for those who drink it: "The water I give will become a spring of water welling up in him to eternal life." That's the kind of water the thirsty Japanese soul needs! Help me, Lord, to lead Japanese people to its source.


Could Bach bring Revival to Japan? 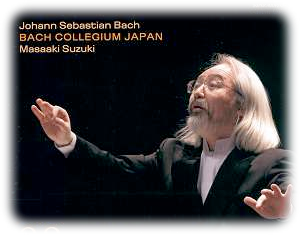 Christian History & Biography reports that tens of thousands of Japanese are coming to Christ through the music of Johann Sebastian Bach. This is primarily thanks to organist and conductor Masaaki Suzuki. When he performs the St. Matthew Passion during Holy Week, the concerts are sold out, and afterwards the stage is crowded with people asking about the messages in Bach’s music. The messages are thoroughly biblical, so much so that Bach’s work was once called “the fifth Gospel.” In the words of one Japanese musician who converted to Christianity: “When I play a fugue, I can feel Bach talking to God.” Bach, a devout believer, would no doubt rejoice to know that centuries later his music is still spreading the good news of the gospel.

On the night of Jesus’ birth, an angel appeared to shepherds. Why shepherds? Perhaps they fit with the humble circumstances of His birth; perhaps God wanted to point back to King David, who began as a shepherd; or perhaps He wanted to point forward, to the arrival of the Good Shepherd and the Lamb of God. In any case, the shepherds responded to the angel as others had, with both awe and terror. “Do not be afraid,” the angel told them, then he proclaimed “good news of great joy”—the gospel—“that will be for all the people”—universal in scope. “Today in the town of David”—prophecy fulfillment alert!— “a Savior has been born to you; he is Christ the Lord”—the Messiah, the Anointed One (vv. 10—12).

Then the skies exploded in praise! The watching hosts of heaven could hold back no longer, appearing suddenly in a blaze of light and belting out, “Gloria in excelsis deo” (Latin), or “Glory to God in the highest”

--from Today in the Word (Moody Bible Institute)