The Best Show in Town 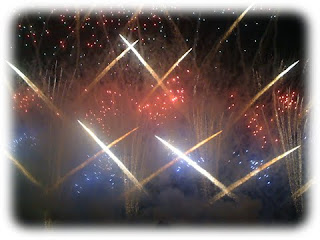 No summer is complete without a good fireworks show. Japan has some of the best I've seen. And Kawasaki has outdone itself year after year. This past weekend our family went to see the show near the Tamagawa river, a mere half-mile from us. We weren't disappointed. The Chinese are said to have invented fireworks, but it might be argued that the Japanese have perfected them. Coordinating the fireworks display with the beat of music was impressive. Most impressive, however, is the sheer size of the fireworks, and their close proximity to ground level.

I always come away with a better sense of the music that has shaped this culture. The "Sukiyaki" song was part of the show, but many more Japanese favorites had the audience of around 600,000 singing and clapping. Yes, I said 600,000. Believe me, it felt like more. I also always come away with a very sore neck trying to take in both fireworks shows. I've written here before about seeing only half the show. This year was the same. But what a great treat to end the summer with!

Seeing only Half the Show 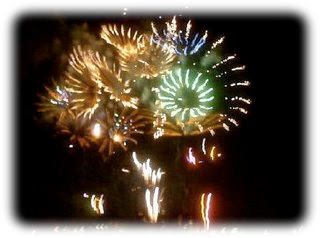 This evening the three of us went to see the fireworks along the Tamagawa river near our home. What is remarkable about a Japanese firework show is the sheer size and intensity of the fireworks. They are so much larger (and lower) and greater in frequency than any Stateside version I have seen.

I found a restaurant in our neighborhood that actually serves what they call "American" hotdogs. It does indeed look like an American hotdog. The bun is a plain white one. And the dog is short, thick and juicy (not the long, skinny Japanese kind.). It even comes with packs of Heinz ketchup and mustard, unlike the Japanese mustard that is some hot Chinese dristan type that clears your sinuses.

The crowd along the river was estimated to be in the hundred thousands, so we distanced ourselves by watching from a park a half kilometer away. Lawnchairs, hotdogs and chips in tow, we watched the show. Felt just like the Fourth of July, but this was August in Japan to be sure.

This year both Kawasaki and Setagaya had their fireworks shows simultaneously along the river as part of a combined coordinated show. Unfortunately it was impossible from our viewing angle to see both parts of the show at the same time. One was immediately in front of us, the other directly behind and to our right. The couple of hundred of others in the park had the same difficulty. Some and oohhed and aaahhhed at the fantastic display in front of them, only to miss the fireworks going off behind them. Some tried flipping their attention both ways and probably went home with a very sore neck. There was no way to see the whole show at once.

This reminded me of how limited our perspective can be as humans when it comes to God's Firework Show: his fantastic work in multiple places all at once. In fact, he is at work in billions of lives at the same time around the globe, yet our focus so often is only on the one life here, or there, that we seem His hand at work, and even that is a limited perspective. How limitlessly more fantastic the show would be for us if we had a broader perspective. If, for even one moment, God were to give us a birdseye view of all He is doing, I know we would certainly join the angels in saying "Holy holy holy!" He is powerfully at work in so many places. Being a missionary has opened my eyes to just a bit of this reality.